A comparison of two different textures in the violence district

When playing through the game, there is a chance that an area can appear with a different texture set. There are various texture sets that can be viewed in the game. The four most common sets are Normal, Downer (which makes everything distorted and reddish), Kanji (which makes everything labeled in Kanji), and Sexual (which has a more sexual theme, with elements of the downer texture-set).

Many of the textures in the game will appear crooked from one perspective, and normal from another. This is most likely because of the graphics engine, which does not correct the perspective of textures. Although, most Playstation games also suffer from this issue, therefore, texture warping could be caused by the Playstation's hardware.

Just like the other objects in the game, the textures appear via some sort of algorithm that takes into account the amount of time played, paths taken, and what you've linked with. The rarity of the four main textures seem to go from Normal, Kanji, Downer, and Sexual, respectively. The chances of seeing each seeming to reduce with each close-encounter with the Gray Man.

Possible Meanings for Each Texture[]

Normal: Most likely, this is the literal, sane version of whatever thoughts you're having during your dream. They relate directly to things you've seen in real life. Very few areas of the game are distorted initially, or are otherwise unrecognizable, so there's little meaning in the "normal" texture pack, other than setting a baseline for how the game 'should look'.

Kanji (logic): Kanji letters appear everywhere - on walls, characters and the ground. The real meaning of this texture comes from notes from Hiroko Nashikawa's dream diary. There's a theory that the kanji textures say the name of the thing they're written on - stone kanji saying "stone", tree kanji saying "tree" and so on. This is why these textures are also named "Logic". Appears on the 11th day.

Downer (Distortion): Every wall or floor has distorted, bloody red colours, and all characters have big cartoony eyes. This texture could represent making the main character feel real fear, and represents that fear, or problems in real life, appearing in his dreams. Appears after the 21st day.

Sexual: For most players, the sexual texture set seems to only appear after the downer textures. This texture set shares an eyeball motif, and other elements from the downer texture set. The entire ground is sometimes covered with eyeballs, and walls can have photos of things like women and lips and the colors shift to various, unnatural hues. Appears on the 31st day and continues to the 40th day. After that, everything will be only in normal textures again.

Along with the sexual textures, there is also another odd texture that's part of the Sexual texture. This texture features many colourful cartoon-like faces, most noticeable in Happy Town, where in fact this texture may be the 'default' texture for Happy Town altogether. It should be noted that this particular set's textures may change 'style' depending on the location. For example, when it appears in Happy Town, the faces appear to be more design-like than actual faces - some barely even seeming to represent them. When it appears, Monument Park seemed to be more feminine and human-looking, done in a style similar to the LSD mascot, and when it appears on the walls at the Pit & Temple it appears a lot darker and creepier than the other two.

When the Textures Appear[]

Every 10 - 11 days, there is a new texture setting available to see in every place. At first 10 days of the game, you will see only original textures. On the 11th day appears kanji Textures, on 21 - 22 you will see downer textures, on 32 - 33 day you will encounter sexual textures.

At 40 days, textures will be erased, and backed up to the original. After next 11 days you will find kanji textures again, and so on.

Mixed among the other textures appears a few rare blocks here and there. They may belong to their own set, or they may just be mismatched along with another set which appears differently in certain areas of the dream-scape.

Upper: Textures reminiscent of Happy Town may occasionally appear in other areas.This only seems to happen in The Natural World so far.

Ancestral: Classic Japanese depictions of people reminiscent of the feudal era appear everywhere and cover a large expanse of the floor. This set only seems to appear in a few locations - most often in Happy Town, where it is actually its substitute for the Sexual texture. Aside from these different depictions of people, the texture set doesn't seem to correlate with any others. This possible feudal/ancestral set may represent the player tapping into their DNA via their dreams and accessing the minds of their ancestors, or they may simply be trying to represent their loved ones in their minds.

Glitch: Occasionally, an area may lag while linking around. When a player links, all the other places in the game will have those same textures. The logo for LSD will appear a lot, strangely enough, and some places regularly not accessible will become possible to go to. It's seems that this glitch happens mainly when you play the game for an excessive amount of time without turning it off. The glitch will continue for as long as the game isn't turned off and on again.

The Glitch texture set may come about when the game attempts to read the aforementioned texture files in the game's data, but calls the data from other regions, most often containing both textures from other areas (usually just one area) and garbage data displayed as random colours (occasionally, it will call actual graphical data, such as the 'mascot' faces, although they will be miscoloured - possibly due to mismatched palettes or somesuch). 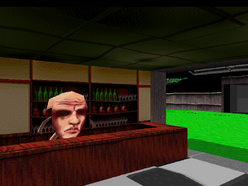 The Bright Moon Hotel in the Regular texture. 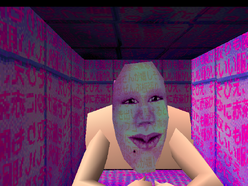 The Bright Moon Cottage in the Kanji texture. 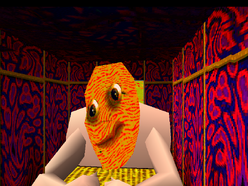 The Bright Moon Cottage in the Downer texture. 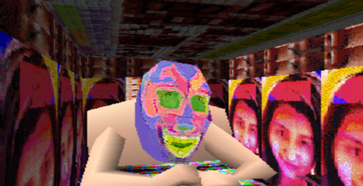 The Giant Baby at Bright Moon Cottage in the Sexual texture. 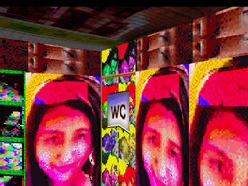 The Bright Moon Cottage in the Sexual texture. 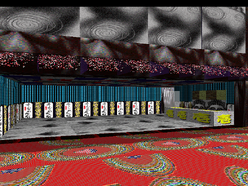 The Bright Moon Cottage in the Glitch texture. 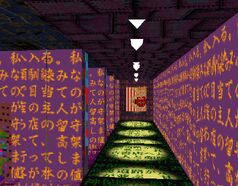 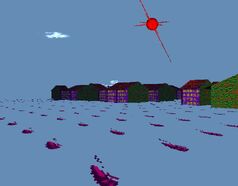 Kyoto in the Glitch texture. 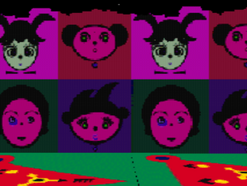 The Sexual texture on the walls of Monument Park. 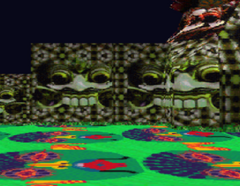 The Sexual texture at the Pit & Temple. 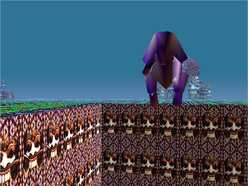 Another view of the Pit and Temple with Sexual textures. 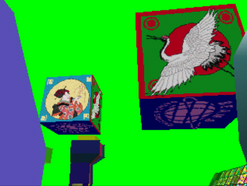 Violence District in the Sexual texture. 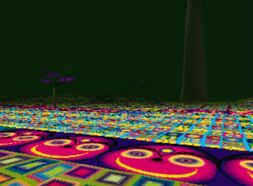 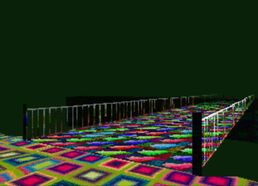 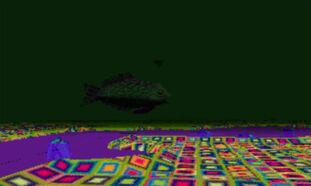 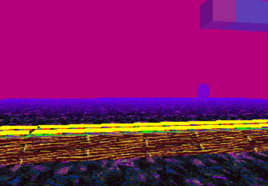 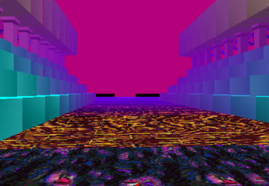 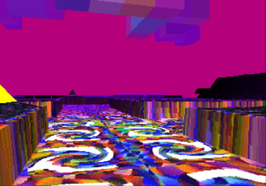 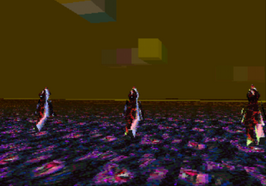 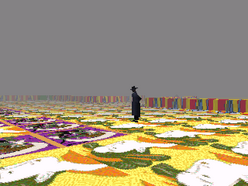 The Long Hallway in the Sexual texture. 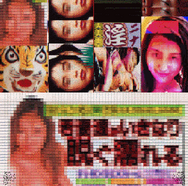 As you can see kanji textures containing dreams from dream diary. 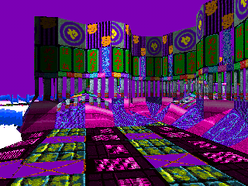 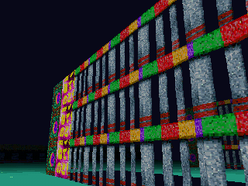 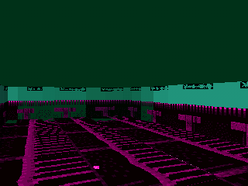 Pit and Temple in Glitch Texture. 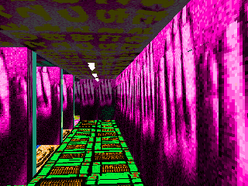