The Black Space is a small area within the dreamscape surrounded by an infinite void. It can be accessed through the Window, the Bird creature, the Zeppelin, the Astronaut, the Dying Woman's empty bed, and the Hopscotch Girl. The player may also spawn here. In this area, the player will typically spawn over a solid black surface, but if one walks far enough, the player will see a white ground. There are several floating blocks in the area.

It's possible to walk some distance on the black surface beyond the white ground, but wandering too far will cause the player to fall into the black abyss, ending the dream.

This area can also be the starting point of a dream.

The blocks on the outer part of the map appear to randomly generate as you walk.

This area could possibly represent space, time, or death. The Dying Woman adds more evidence to the death theory.

Black Space in the Kanji texture.

Black Space in the Downer texture.

The Hoop and Stick girl doing what she does best.

The Window that links you to the Black Space. 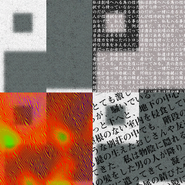 Outside floor
Add a photo to this gallery
Retrieved from "https://dreamemulator.fandom.com/wiki/Black_Space?oldid=16361"
Community content is available under CC-BY-SA unless otherwise noted.